Am I getting enough sleep? What are the latest recommendations?

New recommendations from the American Academy of Sleep Medicine and Sleep Research Society address the question: How much sleep do I need? But if you’re asking that question, chances are you already suspect that you’re not getting enough.

How can I tell if I’m not getting enough sleep?

Although not everything is known about why we sleep, and the functions of sleep, the role of sleep as a restorative process is well recognised. So, if during the day, you are constantly feeling tired, or sleepy whenever you sit down and stop, that can be a good indication that you’re not getting enough sleep.

They see not getting enough sleep as the cause of their symptoms, but these factors can also add to feelings of tiredness or sleepiness. So, if you’ve paid attention to these lifestyle factors, but still feel tired or sleepy across the day, then maybe you need to be getting more sleep.

It’s also important not to judge your tiredness or sleepiness based on how you feel when the alarm goes in the morning, or soon after you wake up. It takes most people an hour or two to feel like they’re at their best, so better to judge how you are going based on how you feel across the day. I also see a number of people who manage fine through the day, but are concerned as they don’t leap out of bed as soon as the alarm goes ready to attack the day. In truth, most people take a little while to get going, that’s pretty normal.

Another way to test if you’re getting enough sleep is to reflect on how you felt during your last holiday or vacation. When you weren’t needing to get up for work and had more opportunity for sleep. If you felt that tiredness and sleepiness symptoms were less, it’s likely that in your usual day-to-day routine you’re not leaving enough time for sleep.

How much sleep do I need?

The recommendations from the American Academy of Sleep Medicine are that adults of working age should get at least 7 hours sleep each night.

There is now research showing that people who average less than 7 hours sleep per night are at increased risk of problems with physical and mental health, such as high blood pressure, depression and anxiety. This occurs even in people who don’t feel tired during the day. It also seems to be important to aim to have at least 7 hours sleep each night, rather than less during the week and catching up on the weekend. This pattern, coined ‘social jet lag’, leads to symptoms of tiredness and impairment of performance such as concentration and memory.

But I try to get at least 7 hours and just can’t sleep. Am I still at risk?

It’s important to understand the difference between not getting enough sleep from being too busy or not allowing enough time for sleep, and those who allow enough time, but just can’t get to sleep or stay asleep despite their best efforts. For people with insomnia, that is, difficulty getting to sleep or staying asleep, the risks of not getting enough sleep only appear to occur if they average less than 5 hours sleep per night.

So, if you have difficulty getting to sleep or staying asleep, it’s important to work on that, and discuss options with your health professional, but don’t get worried that there will be serious consequences for you if you’re not getting at least 7 hours of sleep per night. 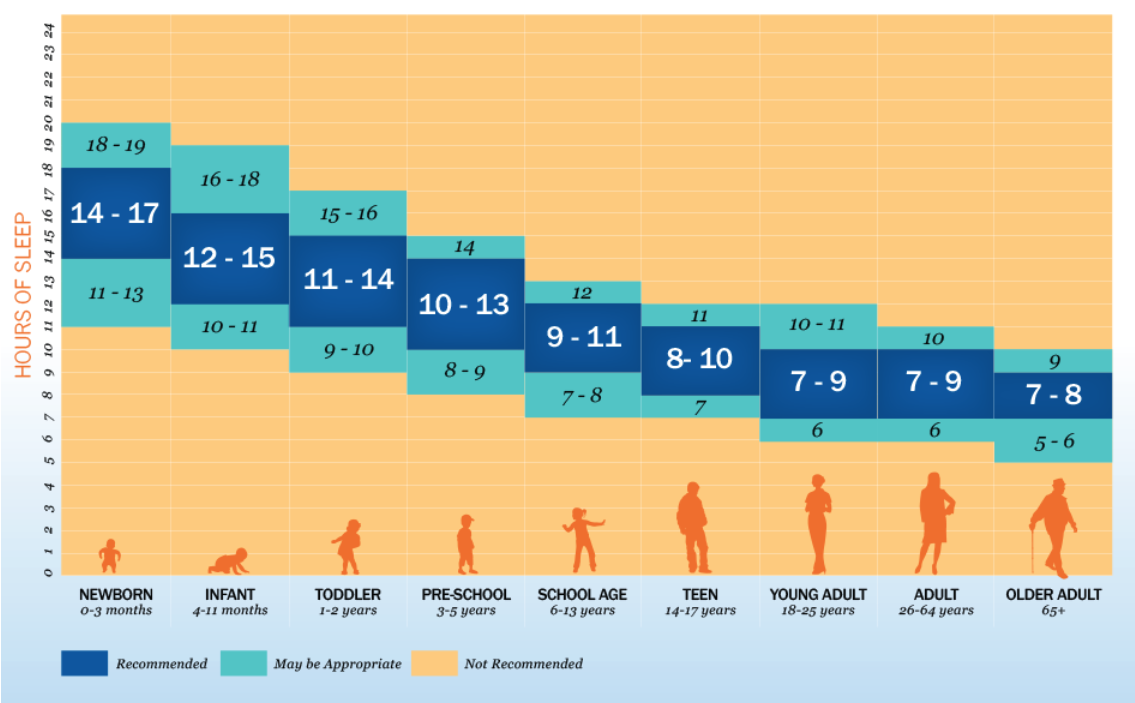 Research has shown that genetic factors also determine how much sleep we need. That means what you need may be different from your partner or work colleagues, so what works for them may not work for you.

One example is the BHLHE41 gene. In a recent study that included twins, one twin with a the  p.Tyr362His variant of the gene, needed over 1 hour less sleep that their twin. There are other genes, such as the PER3 gene, which enable some people to tolerate lack of sleep better than others.

What should I do?