Research in narcolepsy and hypersomnia is continually evolving, with new diagnostic tools and treatment options in development.

As our understanding of the biology of narcolepsy and hypersomnia evolves, other diagnostic tests and treatment possibilities develop. Although it can take some time for these to come in to regular use in the clinic, understanding where research is at and where is it going helps get an idea of the direction things are heading.

1.6% of the general population meet the diagnostic criteria for hypersomnia: Prof Maurice Ohayon from Stanford looked at the proportion of the general population who meet the clinical diagnostic criteria for hypersomnia or hypersomnolence disorder as defined in DSM-V. He found that 1.6% of the general population meet the diagnostic criteria for hypersomnolence disorder, highlighting the fact that feeling more sleepy during the day than expected is a common and non-specific symptom. Unfortunately, this makes it hard to distinguish people with milder forms of hypersomnolence from those with disorders such as idiopathic hypersomnia who are significantly disabled by their symptoms, as both meet the new DSM-V diagnostic criteria. This highlights the importance of developing better biological markers of idiopathic hypersomnia, and also objective measures of severity to help advocate for and support those who are significantly disabled by this condition but can find it hard to access care or services as they are mixed in with those with milder symptoms who probably have different conditions.

Sodium Oxybate (Xyrem) – time to response: Sodium oxybate (Xyrem) has just become available for use in Australia, and people are asking me lots of questions about it’s use. Things like, how long do I need to trial it for to see if it is going to help? Research just published in the Journal of Clinical Sleep Medicine helps to answer that question. They looked at 86 people with narcolepsy who had used sodium oxybate in a clinical trial, and determined how long it took for people to get the maximum response with reductions in cataplexy and sleepiness symptoms. For cataplexy, by 25 days, 50% of people had a 50% reduction in the number of cataplexy attacks. For sleepiness, by 37 days, 50% of people had a 20% reduction in sleepiness, and as shown in the graph below, 50% of people had reached their maximum reduction in sleepiness by 106 days – just over 3 months. 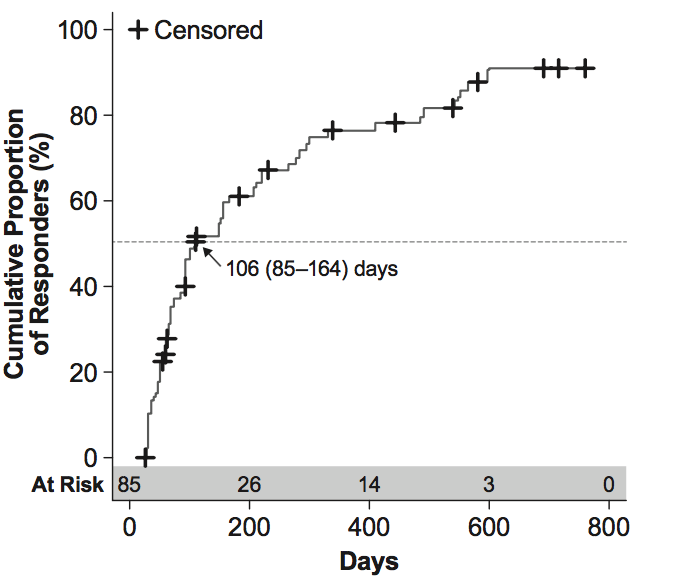 JZP110: Jazz Pharmaceuticals are developing a new drug for the treatment of narcolepsy. It is a combined dopamine transporter (DAT)/norepinephrine transporter (NET) inhibitor, currently labeled JZP-110 (previously known as ADX-N05). So far, they have tested it in people with narcolepsy. In one trial presented at Sleep 2015, of 90 people with narcolepsy, 47% reported being either very much or much improved taking JZP110. Jazz also reported clinical trial data suggesting that the simultaneous antagonism of both DAT and NET may be more effective than drugs that have just one of these actions and don’t result in as much release of wake-promoting neurotransmitters.

Pitolisant: Histamine is thought to be one of the key neurotransmitters involved in the regulation of alertness and wakefulness. Pitolisant is a histamine 3 receptor (H3R) inverse agonist, and is the first agent that acts on histamine to be evaluated by health authorities for the treatment of sleepiness. So far, the majority of clinical trials have been in narcolepsy, but as histamine is thought to be important in idiopathic hypersomnia (IH), it may have a significant effect in people with IH. Final regulatory approval for the use of pitolisant in narcolepsy is pending in Europe, so it may be available in Europe soon as a narcolepsy treatment. Previous work published in The Lancet in 2013 had shown pitolisant had similar effects to modafinil on sleepiness in people with narcolepsy.

Orexin receptor structure and orexin receptor agonists: As narcolepsy with cataplexy is a disorder of orexin deficiency, with orexin secreting neurones being destroyed by an auto-immune process, the ideal treatment would be orexin replacement. However, this is difficult as the receptor structure hasn’t been well characterised and it is difficult to get the required drugs in to the brain, across the blood-brain barrier. However, recent work published in Nature has been able to work out the structure of the human orexin 2 receptor, and how to bind drugs to it that could then either stimulate or inhibit the receptor. Drugs that stimulate the orexin receptor (agonists), would be an ideal treatment for narcolepsy with cataplexy, that would address all of the symptoms by replacing the effects of missing orexin. From this research, other groups have now already developed orexin receptor agonists, and are moving on to looking at how to get these drugs in to the brain in the required concentrations. We hope that in 5-10 years we will have orexin receptor agonists available in the clinic as treatment for narcolepsy with cataplexy.