What’s new in the diagnosis and treatment of hypersomnia in 2016? 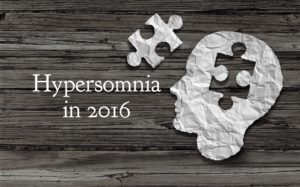 In clinical practice it can be difficult accurately diagnosing people with hypersomnia and excessive sleepiness. Apart from narcolepsy with cataplexy, or type 1 narcolepsy, where there are distinct symptoms, and the possibility of testing orexin levels in cerebrospinal fluid, it can be hard to make an accurate diagnosis. Managing people with hypersomnia can also be difficult, as a substantial proportion of people are refractory to treatment with currently available wake promoting medication.

Issues around diagnosing and treating hypersomnia were discussed at the recent Sleep 2016 meeting in Denver, and I’ve tried to summarise some of the main issues that were covered.

The International Classification of Sleep Disorders 3rd Edition (ICSD-3), divides central disorders of hypersomnolence in to narcolepsy type 1 (with cataplexy), narcolepsy type 2 (without cataplexy), idiopathic hypersomnia and then a range of other hypersomnias secondary to medical or psychiatric conditions or medications and the rare condition, Klein Levin syndrome.

The criteria for the diagnosis of idiopathic hypersomnia listed in ICSD-3 are:

Whilst people with narcolepsy type 1 can usually be differentiated from these criteria, narcolepsy type 2 and hypersomnia associated with medical or psychiatric disorders can often overlap significantly with these symptoms. In addition, I often see people with most, but not all of these symptoms. What do they have? They clearly have a problem as they have been severely impacted by their symptoms and sleepiness. How much sleep and sleepiness is normal? Some surveys suggest around 8% of people sleep for more than 9 hours per day, and 1.6% of people report sleepiness intruding on their waking activities. One of the tests we commonly use, the multiple sleep latency test, whilst helpful can be negative in people with all the other symptoms of idiopathic hypersomnia (IH). In one study, 71% of people with long sleep times and other symptoms of IH had a mean sleep latency of >8 minutes. In addition, unpublished data from Emory University has shown that around 50% of people with chronic fatigue syndrome meet the multiple sleep latency test criteria for IH. Other studies have shown that 25% of people with hypersomnia due to psychiatric conditions have a mean sleep latency (MSL) of <8min.

There really wasn’t any clear consensus on how exactly to define hypersomnias and idiopathic hypersomnia. Unfortunately there are not good biological markers, and trying to make a definite diagnosis based on symptoms is fraught with difficulty. So an approach put forward by the team from Emory and that seems to make sense is to try to exclude other factors that can add to sleepiness symptoms such as depression and circadian rhythm disorders, as well as getting a number of objective measurements of sleepiness and it’s impact. They do this by performing the below tests and assessments:

Although the team at Emory were testing CSF GABA potentiation in everyone with hypersomnia at one point, they are not doing this routinely at the moment, and have found that people with sleepiness due to other causes such as sleep apnea can also have GABA potentiation, meaning what they had previously described as a ‘somnogen’ may not be specific for idiopathic hypersomnia, but may in fact be a mediator of sleepiness symptoms in a range of conditions.

Clarithromycin – has been used by the team at Emory who published their research in Annals of Neurology in 2015.  In that paper they treated 23 people with clarithromycin and they reported the results on 20 cases using clarithromycin 500 mg twice daily.  They did not show changes in reaction time but did show subjective measures of sleepiness were significantly improved.  People did get gastrointestinal side effects and changes in taste so it was not well blinded, so it is a little hard to know exactly how to interpret that but nonetheless this may be a helpful agent.

Flumazenil – has also been used at Emory. At the meeting they presented their experience with 153 patients they treated between 2013 and early 2015.  They administered flumazenil as sublingual lozenges or transcutaneous lotion. Overall 63% of people felt flumazenil had helped their sleepiness, dropping the mean Epworth Sleepiness Score in the group from 15 to 10.3 and 39% of people remained on treatment at the end of the observation period which was an average of 7.8 months.  Interestingly, one of the predictors of clinical response was the presence of significant sleep inertia with 72% of those with sleep inertia getting a good response versus 42% of those without sleep inertia.

Sodium Oxybate (Xyrem) – is another treatment that was discussed for sleep inertia, which can be one of the most difficult symptoms to manage in people I see with hypersomnias. Whilst Xyrem is most commonly used in treating narcolepsy, Isabelle Arnulf from Paris has treated a number of people with idiopathic hypersomnia with sodium oxybate. Their results, published in Sleep Medicine in 2016, showed that it can reduce morning sleep inertia and probably had a greater effect on this than on overall sleepiness symptoms.

JZP-110 – is a compound being developed by Jazz Pharmaceuticals that has both dopaminergic and noradrenergic activity. In two small clinical trials with a total of 126 subjects, it has been shown to increase the mean sleep latency (MSL) on a maintenance of wakefulness test (MWT), by 8.9 minutes. This may not sound like much, but in comparison, in the sentinel modafinil studies, MSL increased by 2.3 minutes, and for dexamphetamine there is a 5.6 minute change. So, at this stage results for JZP-110 look promising and it appears significantly more effective than modafinil or dexamphetamine. Larger phase 3 trials, aiming to enrol over 800 subjects with sleepiness started in mid 2015 and results are expected at the end of 2016.

Non-drug treatments – There is increasing acknowledgement that medications only partially address symptoms of sleepiness and that there is a role for psychological and behavioural treatments to reduce the impact of symptoms in people with hypersomnias and other conditions that cause sleepiness. For people with narcolepsy with cataplexy, napping has long been used as a strategy, but for people with IH, napping as a strategy often doesn’t work as they can’t have short naps and have significant sleep inertia on waking from naps. Research on behavioural strategies to help manage symptoms of sleepiness is now being undertaken and I had a chance to talk with Ass Prof Jason Ong about it at the meeting in the following interview: