Waking up at night is common. Is it a normal part of sleep? 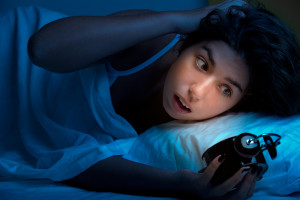 It is common to wake up during sleep.  In fact most people wake two or three times during the night.  We can all remember a time, when as teenagers or young children, sleep was a continuous period of unawareness or oblivion that lasted between eight or nine hours, or even longer.  However, that is not normal adult sleep.  Indeed, once we pass our teens, sleep tends to be lighter and awakenings during sleep more frequent. In women at the age of 50, the average number of awakenings per night is 3.7.

Historically if you read about how human sleep has been described over thousands of years, it has been described as three to four hours of deeper sleep after the sun goes down followed by a period of being awake.  That period of being awake in fact could last a couple of hours and was then followed by dozing through the remainder of the night until the sun came up.  This description of sleep led to the description of a first sleep and second sleep and sayings such as “…an hour of sleep before midnight is worth two hours after midnight.” These sayings are over 500 years old and reflect historical experiences of human sleep.

Since industrialisation in the early 18th century there has been an increasing expectation of sleep being over a shorter period without periods of being awake during the night. This was to enable longer periods of time at work in the new factories and mills that were being developed. In the mid 19th century with increasing industrialisation and gas and electrical lighting, waking activity encroached further in to the night, with sleep relegated to occurring in a single period of up to 8 hours.

Why do we wake up at night?

We wake from sleep for many reasons.  Often it is just a part of normal sleep, as we sleep in cycles.  Each cycle lasts between 60 and 120 minutes and at the end of each cycle it is normal to come up closer to the surface before then heading off into the next cycle of sleep.  If something disturbs sleep when we are at the end of a sleep cycle, we can wake up and feel quite awake. This can account for why people feel like they are waking at the same time each night or with regularity each hour or 90 minutes for example.  People often get frustrated about awakening at exactly the same time each night. But, it’s actually reassuring and a great sign that the body’s internal clock and sleep mechanisms are working extraordinarily well to be so well synchronised that they are able to wake up or come up to the surface at the same time each night.

Sometimes wakenings are for other reasons such as pain, feeling short of breath, getting uncomfortable or a need to use the bathroom.  All these things become more common as we get older and our bodies less able to shut down completely during sleep for long periods, instead having shorter periods of sleep interspersed by getting up for “maintenance” such as going to the bathroom or rolling over.

But we’ve all experienced sleeping for 8 hours non-stop

Sometimes people also feel that sleep should be eight hours of continuous unawareness of the environment.  However, around 30% of normal sleep consists of the type of sleep where we have some awareness of things going on around us.  In people who have got chronic physical or mental illness whose proportion of sleep where there is awareness of what is going on around us can be even higher, as high as 70%.  When people have this type of sleep it is often hard to recall or estimate whether we have actually been asleep or not and it can lead to people underestimating how much sleep they are actually having.

It is important for health professionals treating people with sleep problems to recognise this as we do not want to get into the habit of adding sedative medications which have potential side effects and carry-over effects chasing this state of continuous unawareness during sleep which is really not a natural state even though it is what a lot of people wish for in their ideal sleep as that is how they recalled sleep when they were younger and in better health.

What should I do if I wake up at night?

If you are wakening at night do not be too concerned, it is actually a normal part of sleep.  It does become a problem though if people when they wake become frustrated and have difficulty returning to sleep.  One way of avoiding that difficulty is being less frustrated or annoyed if and when you wake.  However, if this alone does not work stimulus control measures can be helpful.

The basic instruction of stimulus control is that if you have been awake in bed for 15 minutes or more and feeling that sleep is a long way off, get out of bed and do something else until you feel sleepy before returning to bed.  It’s important that the other activity you do is not overly stimulating or engaging. I often find it is helpful for people to have a plan beforehand for an activity that they may do if they wake at night so that they have got a set book to read or puzzle to work on in a designated place such as a chair with appropriate low-level lighting. That way, if they do wake at night there is something they can do rather than ending up checking work emails or doing a more stimulating activity which gets in the way of getting back to sleep.

If you find that you’re waking more than you think you should and consistently having trouble getting back to sleep, it’s worth talking to your health professional.

Note: A modified version of this article has been published in The Huffington Post. Read it here.