What’s the relationship between sleep and weight?

One in 20 people with insomnia have compulsive eating during sleep. People with sleep apnea, gain on average 10kg in the year before they are diagnosed. Shift workers have an increased risk of obesity. Why does this occur and how do sleep, metabolism and obesity interact?

There is a two-way relationship between how we sleep, appetite and how the body handles energy.  There has been lots of data in recent years showing that if we are chronically sleep deprived, as many of us are, it changes the way we take in energy and what type of calories we crave.  People who sleep for shorter periods have been shown to take more calories per 24 hours than those who are well rested. They also to take in more carbohydrates with salty, starchy foods rather than protein-based food.  In addition to taking in more calories, those calories are then more efficiently stored due to changes in metabolism, resulting in greater weight gain compared to those who are well rested.  The increase in adrenaline activity that is part of sleep deprivation is one of the mechanisms of changes in metabolism. It causes a mobilisation of glucose stores, resulting in higher glucose blood levels which in turn increases the risk of diabetes and cardiovascular disease.

What has timing of sleep got to do with it?

Another factor where sleep can have an impact both on what we eat and weight is when we eat.  Sleep is one of the important functions of the circadian “master clock” system but appetite and energy regulation also come under circadian control.  In essence, there are periods during the day when our body is more geared up to efficiently store energy and other periods when the body will burn energy in a more efficient way.  If we eat meals irregularly, we end up taking in calories at times when the body is not ready to deal with it and can deal with it inappropriately leading to higher glucose levels and greater storage of energy and weight gain.  There have been numerous experiments with mice showing irregular eating leads to weight gain and this data is starting to be replicated in human studies.  With our increasingly busy schedules and irregular patterns this may be one of the important factors in the obesity epidemic.

Eating during set times rather than grazing

Research discussed in the New York Times Magazine, and published in Cell Metabolism looked at the role of eating outside a set 9 or 12 hour window each day.  Researchers found that if they allowed mice to eat only within a 9 or 12 hour window each day (time restricted feeding), they remained lean and healthy even when eating an unhealthy diet. Mice that were allowed to eat whenever they wanted (ad libitum), gained weight even when eating a healthy diet. These changes were there even though both groups ate the same amount of calories. 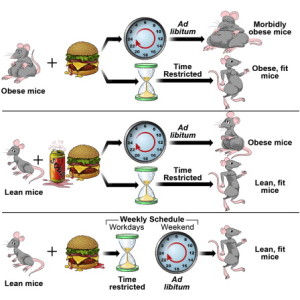 In modern society, where we eat on the run, graze, and rarely stop for set meal times, yet struggle with weight control this research provides important insights.

In research published in the Journal of Hypertension, it was shown that men gained 6.8kg and women 8kg in the year prior to being diagnosed with sleep apnea. There are a number of potential reasons for this, including the effects of tiredness meaning people felt less like exercising nor had the energy to prepare healthy meals. But in the years since this research was published in 1999, it has been shown that sleep apnea itself changes metabolism. There is an increased risk of diabetes, and increased adrenaline much like in sleep deprivation.

As people begin to gain weight, it increases the degree of sleep apnea, and the disturbed sleep that then occurs as part of sleep apnoea in turn causes metabolic changes and further weight gain which then further exacerbate sleep apnoea.  This vicious cycle is something I commonly see in the clinic. Making a diagnosis and getting people on effective treatment can interrupt this cycle and help people regain their health.

Obesity can also cause tiredness

It’s not clear whether obesity itself causes changes in sleep quality, but it often causes symptoms of tiredness. There are lots of potential mechanisms for this, that are discussed in this a comprehensive review of the topic that was published in Sleep in 2012. article. They include:

Good sleep is a key to maintaining a healthy weight

If you’re not sleeping well, and having trouble with weight, you’re not alone. There are lots of mechanisms by which sleep can impact on weight, which reinforces the importance of good sleep to maintaining a healthy weight.

Resources Categories
Popular Posts
SleepHub on Twitter
My Tweets
About Us