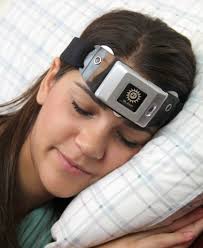 People with insomnia commonly have trouble accurately estimating how much sleep they are getting. This happens as sleep is lighter and closer to the surface, so it can be hard to differentiate light sleep from being awake. This can lead to people feeling that they are sleeping worse than they actually are and add to their concern and worry about their sleep. In managing insomnia I also find it helpful to get a picture of sleep quality and sleep architecture as this can guide choice of both psychologically-based (non-drug) treatments and medications if needed. The Sleep Profiler allows for multi-night EEG (brain wave) recording at home providing an accurate measurement of sleep over 3 nights.

Dr David Cunnington, sleep physician, talks with Dan Levendowski from Advanced Brain Monitoring about the Sleep Profiler and it’s use.

David Cunnington: I’m here with Dan Levendowski from Advanced Brain Monitoring and Dan, you’ve got the Sleep Profiler. It’s another one of your devices I really like and I use a lot in my patients. Can you tell us a bit about what it is?

Daniel Levendowski: So we designed the Sleep Profiler to help clinicians be able to look at sleep disorders that they normally don’t have good tools to evaluate during the night. So patients for example with insomnia, we use self-reports on whether they have trouble falling asleep or staying asleep and we previously used that to clinically diagnose.

What we wanted to do was create an objective tool like what we have for sleep apnea to make it available for insomnia or mood disorders that would be able to look at the sleep architecture, be able to look at the sleep continuity so that clinicians could either verify the patient self-report or they could identify the underlying conditions that are actually causing the patient to wake up in the morning and feel fatigued.

David Cunnington: Whilst I use it in people with insomnia and really like that ability to look at the sleep architecture, what are some other groups of people that have trouble switching off where you found other people use this device?

Daniel Levendowski: So the device is being used for example in patients with mood disorders. Depression is another one. Pain where patients are being given medications and the whole quality of sleep and perception of pain is one of those loops that are really problematic. So what we’re trying to do is use it in cases where pharmacological interventions where if used in excess, even if it was hypnotics in insomnia patients, where you’re trying to provide information to help behaviourally change the patients used of the pharmacological interventions.

So that relationship between sleep and performance is something that all of the lead athletes know about but they haven’t had something convenient to be able to use that is really a clinical tool that is being used for these non-medical purposes.

David Cunnington: When I use it in insomnia, one of the ways I use the device and I like the ability to measure sleep over three nights. It’s really to look at that comparison between the self-report or the diary and what we actually record. So how have you set that up in the software to make it easy for people to look at that?

Daniel Levendowski: That was a suggestion from one of our clinical advisers who talked about when she’s sitting across from that insomnia patient and she’s having to present the information, she wanted a quick and simple way to be able to show the patient, “Here’s what you thought happened on the nights that you wore the device and here’s what actually happened.” So that it became – would become more obvious to her and to the patient when there was sleep state misperception. Sleep state misperception means that the patient thinks that they’re awake a lot longer than the objectively are.

So being able to show them for example and it’s quite common the sleep state misperception that they will think it took them an hour to fall asleep when they maybe fell asleep in 15 minutes. That’s very much within the normal range or they felt that they woke up after they originally fell asleep for a couple of hours and in fact they may have been awake for maybe 20 or 30 minutes, which again is a normal amount of time for any healthy person that could be awake during the night and not be considered abnormal sleep quality.

David Cunnington: We’ve looked at that in our practice. We’ve actually got a poster here where we look at 11 people with the use of a sleep profile or people with insomnia and found exactly that, that they’re sleeping more than what they perceive. It’s really in the last five years or so my approach with insomnia has been trying to work on people’s distress about how much sleep they feel they’re getting versus how much they wish they’re getting.

I think that’s where we need to focus a bit on insomnia and tools like this are really helpful in getting a much better measurement and a better understanding of what the brain does during sleep.

Daniel Levendowski: One of the things that we did with the technology to help address exactly what you’re talking about is in the sleep world, we’re trained that there’s this category called “stage N2 sleep” and it constitutes between 50 and 60 percent of the night and yet we previously didn’t have a way of further characterising that of lighter periods of N2 sleep and deeper periods of light N2 sleep.

So we start out in wake and then we go to N1 and that’s kind of the transition to this period that’s about 50 to 60 percent of the night and the issues is, is if you’re in the lighter portion of N2, then it becomes much more easily for you to arouse during the night and then you will waken whether you remember it or not. Then so that’s what leads to this fatigue in the daytime because they don’t get the continuous non-interrupted deeper N2 and N3 sleep.

So we’ve characterised this light N2 as a way of helping clinicians like yourself look at the overall quality and looking at that 50 or 60 percent of the night and subdivide it into – being able to do a better job identifying those patients who may have that anxiety that causes them to sleep lighter and not get into as deep sleep.

David Cunnington: I generally use the term sleep stability to talk about that concept. We’ve talked before about you can use the cyclic alternating pattern as one way of trying to classify that lighter N2 sleep or cardiopulmonary coupling, thinking of it as a low frequency cardiopulmonary coupling. So yeah, I find that a really useful tool. So can you show us the device, Dan?

Daniel Levendowski: So this is the Sleep Profiler. It has three sensors and it’s quite easy. All you have to do is put it around the head. It sticks to the forehead and that’s enough. From the device, we’re able to measure the ocular movement during sleep which is used to be able to differentiate REM, rapid eye movement sleep, from some of the other stages. Then we’re also able to look at the – what we call slow wave activity that’s very important for long term health, to reduce the risk of chronic disease. We find that the time in slow wave sleep, that’s usually in the first part of the night, that that’s very, very important for long term sleep health.

The device also has an acoustic microphone. So it’s not uncommon for older women who – you know, post-menopausal women who were – their sleep apnea begins to occur and they get misdiagnosed with insomnia where they may have some underlying sleep and breathing disorders.

So with the acoustic microphone, it provides the clinicians some additional information to kind of help them understand what’s going on during sleep.

David Cunnington: And it has tipped me off a couple of times. There are a few people with insomnia where I’ve thought it’s insomnia but I’ve seen a lot of snoring on the microphone and I’m going, “Oh, yeah, OK.”

Daniel Levendowski: Time to bring them into the lab for a study.

Daniel Levendowski: I think the other measure that we’re very excited about is being able to look at the autonomic activation. So that’s the heart rate and the heart rate will tend to be much, much more variable in patients who are anxious, in athletes that go to bed and have a lot of adrenaline. So they’re not able to kind of shut it off and that will lead to excessive heart rate variability during sleep and those are kind of a tell for poor quality sleep.

David Cunnington: Thanks very much Dan and I really enjoy the device and good work.