What is positional therapy? Can it help reduce snoring and sleep apnea?

Why does snoring and sleep apnea occur more on your back?

Snoring occurs when there is narrowing in the airway between the back of the nose and the voice box or larynx. When we go to sleep, muscles, including those in the upper airway, relax and can cause the airway to narrow. The largest muscle in the upper airway is the tongue. The tongue falling back towards the back of the airway is the most common cause of airway narrowing. When the airway partially narrows, airflow becomes turbulent, which then sets up vibration of soft tissues and generates a snoring noise. Sleep apnea is when the airway gets narrower again, and either blocks completely or is narrow enough, that breathing is more difficult. The brain senses this during sleep and reacts by breathing harder and even causing short awakenings, called arousals, from sleep. These breathing changes can be measured during a sleep study and counted to determine how many times per hour they are occurring. This is called the apnea-hypopnea index or AHI.

Does keeping off your back reduce sleep apnea?

The short answer is yes it can. But, the longer answer is not for everyone, and keeping off your back as a long-term treatment can be tough. One of the reasons I will do a sleep study in people with snoring and sleep apnea is to look at the effect of body position to consider whether people are suitable for positional therapy. For people who are shown on a sleep study to have little snoring or sleep apnea on their side or non-supine, positional therapy can be an effective treatment. 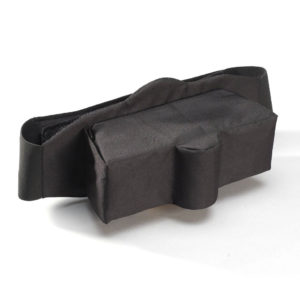 A study of 38 people with positional sleep apnea showed that avoiding sleeping on their back using a mechanical device (Zzoma positional sleeper – pictured) worked as well for controlling sleep apnea as continuous positive airway pressure (CPAP). This only looked at the effectiveness over 1 night, but did show that in principle of keeping people off their back was helpful to reduce snoring and sleep apnea. However, in the longer-term,a study looking at long-term use of devices such as this at home showed that by 30 months only 10% of people were still using them.

Better long-term effectiveness has been shown with a less intrusive device, the Night Shift. This gives a vibratory signal to the back of the neck whenever people roll on to their back and has been shown in a recent study to remain effective out to 12 months, with 88% of people still using the device at 12 months.

What can be used to keep off your back during sleep?

What about other treatments?

Other treatments that are used for snoring and sleep apnea, can also be used in positional sleep apnea, either as a stand-alone treatment or as an add-on treatment to positional therapies such as the Night Shift device.