What are periodic limb movements?

It is very common to have movements occurring during sleep.  Some movements are just random movements, such as when we are changing position during sleep.  However, other movements are more rhythmical, occurring every 20-40 seconds repeatedly. These are often similar movements, such us the foot or toes pulling back, and sometimes the knee bending. Often these are noticed just by the bed partner but if they are more significant can disturb the sleep of the person who is having these movements. They are different from the jerking movements that can occur as we are drifting off to sleep, as periodic limb movements occur once we are asleep, generally in N2 (stage 2 non-REM) sleep.

Why do periodic limb movements occur?

Periodic limb movements are common and occur in around 4% of adults but by the age of 60 this is around 30% of healthy adults.  Not everybody gets symptoms related to these, but they are commonly noted by a partner who may be disturbed by the constant movements.

Usually during sleep, movement and muscle tone in the legs is suppressed by a signal coming from the base of the brain, down the spinal cord, that suppresses movement. But, as we get older this signal can become interrupted or medications with anticholinergic effects (many antidepressants) can interrupt this signal.  When this happens, the legs are capable of moving, and rhythmical leg movements can occur. The movements are rhythmical and very similar movements each time as they come from a spinal cord reflex that produces a discharge every 20-40 seconds during sleep.

Iron levels in the brain are also important in the control of movements during sleep. When there are low iron stores, either throughout the body, for example in iron deficiency, or just in the brain, because of changes in the way iron is transported to or metabolised in the brain, there can also be a reduction in the usual suppression of movement that occurs during sleep.

The movements, which are more common in the legs than the arms, occur for between 0.5 and 5 seconds recurring at intervals anywhere between 5 to 90 seconds but more commonly between 20 to 40 seconds.

A bed partner often reports rhythmical foot or leg movements. An example of what this commonly looks like on video is this YouTube clip. Leg movements can be more dramatic such as the ones in this clip. Although these look funny and as if they are made up, I’ve seen a number of people with leg movements exactly like this during sleep. Understandably, they have terrible trouble sleeping.

The example below, from a sleep study, shows 2 minutes of data recorded from around 2:40am during N2 sleep. The channel (LEG-EMGs) shown in dark blue, shows leg movements occurring regularly across the 2 minutes with 7 leg movements in that time. 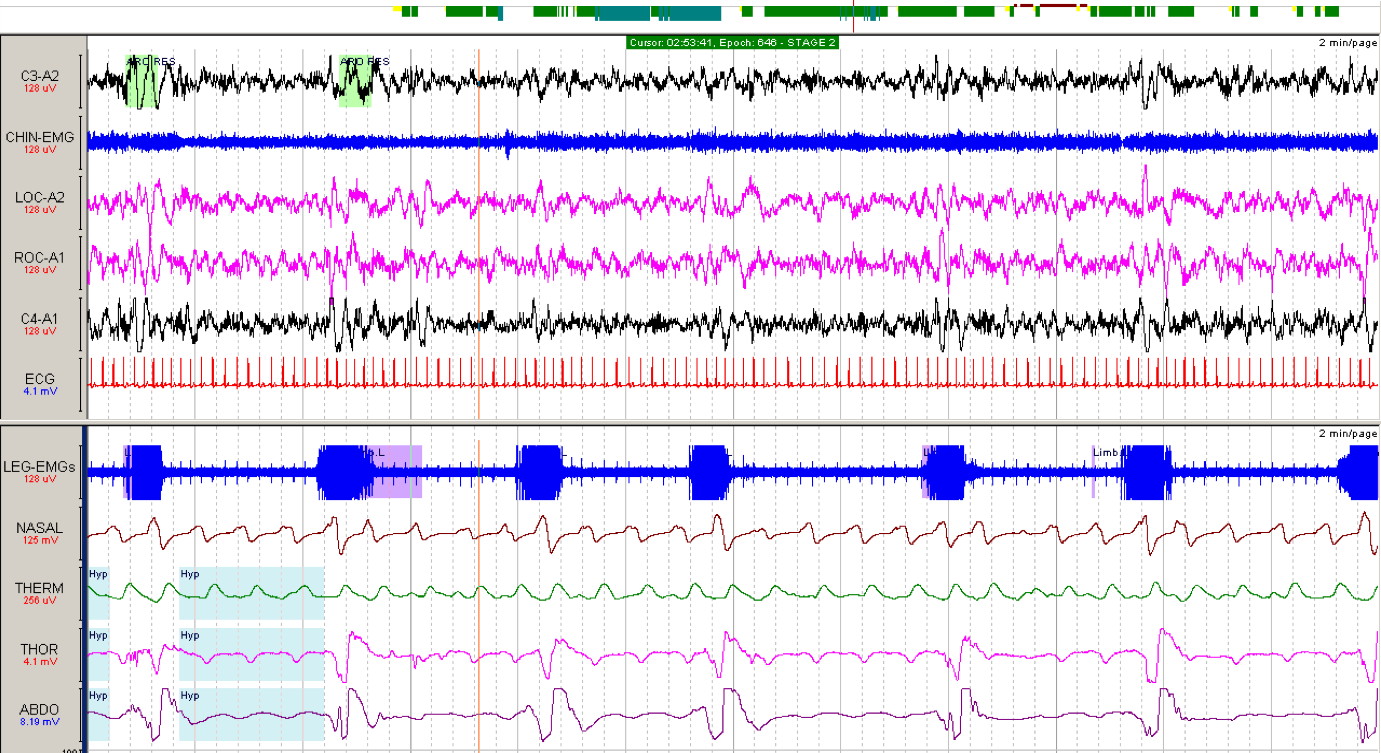 Technical note (geek alert): There is also a shift in bands around the chest (THOR – pink) and abdomen (ABDO – purple) because muscles in the trunk also contract when there are more prominent leg movements. This can give the impression that the problem is a change in respiratory effort leading to these leg movements getting misdiagnosed as sleep apnea. It can be hard to differentiate periodic limb movements and subtle sleep apnea on a sleep study, but using a combination of video, good quality leg EMG and nasal pressure signals can help to sort this out.

Restless legs syndrome is a symptomatic disorder where, before retiring to bed people feel a sense of restlessness in the legs either when sitting still or when laying in bed ready for sleep.  In contrast, periodic limb movements are something that are more commonly noted by a bed partner during sleep or recorded on a sleep study.

If people are getting symptoms of periodic limb movements they are treated in a very similar way to restless legs syndrome.  If iron levels are low or at the low end of the normal range, it’s worth replacing iron as that may help. Medication such as gabapentin, dopamine agonists or benzodiazepines can also be used.

More details on these drugs and their use are in this post on restless legs treatment.

What should I do if I have periodic limb movements?

If you or someone you know has periodic limb movements, it’s worth discussing with your doctor. Periodic limb movements, whilst they can be a normal part of aging or secondary to medications, can be associated with other medical conditions such as pinched nerves in the lower spine, so it is important to discuss them with your doctor who may then refer you onto a sleep physician for further evaluation.