Orexin: a key to sleep-wake regulation 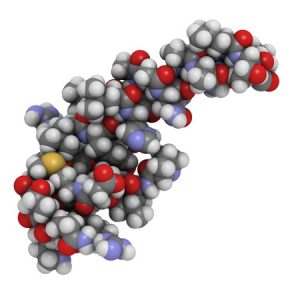 Orexin, also called hypocretin, is a neuropeptide produced by neurones in the lateral hypothalamus that regulates arousal, wakefulness and sleep stability. Orexin was discovered in 1998, simultaneously by 2 different groups of researchers. There are 2 forms of orexin: orexin-A and -B, which bind to the G-protein coupled orexin receptors, OX1 and OX2. Orexin-A binds to both OX1 and OX2 receptors with equal affinity, whereas orexin-B binds mainly to OX2.

What role does orexin play in sleep regulation?

Orexin promotes the activity of the monoaminergic wake-promoting systems, and also stabilises the relationship between sleep and wake. When orexin is present in normal levels, people can generally stay awake without falling asleep. However, when orexin levels are low, the GABA-ergic neurones in the ventrolateral pre-optic nucleus (VLPO) become predominant and people go to sleep. If orexin levels are very low or absent, as can happen in narcolepsy, then not only do people feel sleepy but they can go rapidly in to REM sleep or have features of REM sleep, such as vivid dreams (hypogogic hallucinations) or muscle weakness (cataplexy) whilst awake. 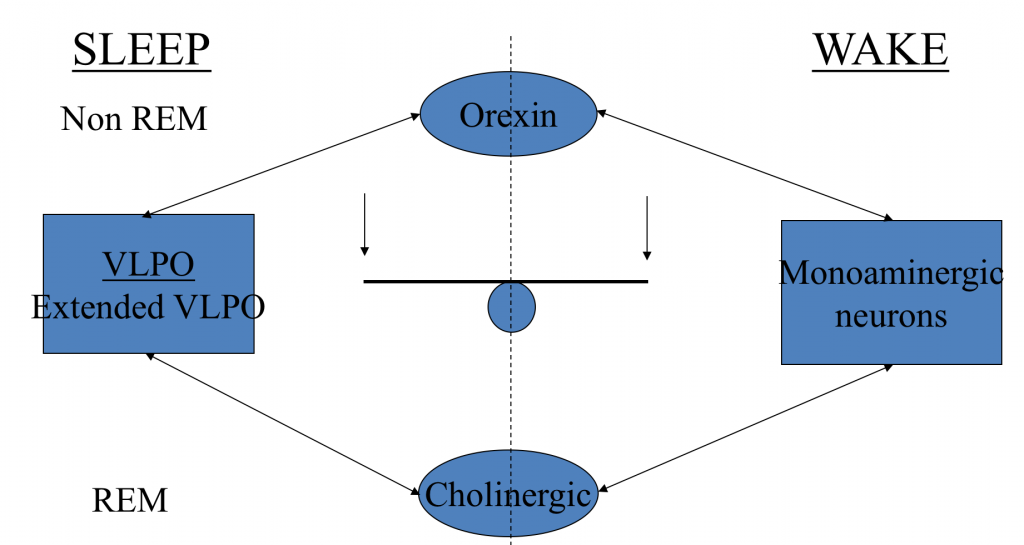 Sleep-wake regulation is also discussed in review papers such as this one in Neuron in 2010.

For more on the role of orexin in sleep regulation, listen to this interview with Prof Daniel Hoyer.

Given orexin’s role in stimulating wakefulness, the pharmaceutical industry has been working on developing orexin antagonists (blockers) as treatments for insomnia. Suvorexant (brand name Belsomra) is the first of these to be approved for use.

Suvorexant is a highly selective dual orexin receptor antagonist which acts on both the orexin 1 (OX1) and orexin 2 (OX2) receptors.  By binding to the orexin receptor, suvorexant blocks the binding of orexin and suppresses waking drive. The major clinical trials of suvorexant tested doses of 20mg (15mg in over 65 years of age) and 40mg (30mg in over 65s). The dose approved or use in Australia is 20mg (15mg for over 65s). The best study to look at suvorexant effectiveness at this dose is the pooled analysis of phase 3 trials published in the Journal of Clinical Sleep Medicine in 2016. (Herring et al, J Clin Sleep Med 2016; 12(9):1215-1225).

Replacing orexin as a treatment for narcolepsy

As narcolepsy with cataplexy is a disorder of orexin deficiency, the ideal treatment would be orexin replacement. However, this is difficult as the receptor structure hasn’t been well characterised and it is difficult to get the required drugs in to the brain, across the blood-brain barrier. However, recent work published in Nature has been able to work out the structure of the human orexin 2 receptor, and how to bind drugs to it that could then either stimulate or inhibit the receptor. Drugs that stimulate the orexin receptor (agonists), would address all of the symptoms by replacing the effects of missing orexin. From this research, other groups have developed orexin receptor agonists, and are moving on to looking at how to get these drugs in to the brain in the required concentrations.

We hope that in 5-10 years orexin receptor agonists will be ready for clinical trials as treatment for narcolepsy with cataplexy.