Idiopathic hypersomnia (IH) is a chronic neurological disorder that results in excessive daytime sleepiness (EDS), frequently accompanied by an excessive need for sleep (ENS) despite long periods of sleep overnight and during the day. 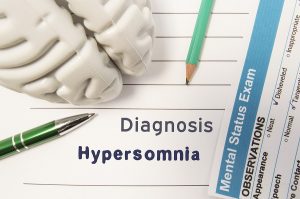 The most common symptom of IH is excessive daytime sleepiness despite an adequate, or even very long period of sleep per night. Other symptoms include un-refreshing or non-restorative sleep. Severe sleep inertia or sleep drunkenness, which is extreme difficulty awakening from sleep, accompanied by feelings of grogginess and disorientation upon awakening is also a common symptom.

People with idiopathic hypersomnia experience a more complicated and prolonged sleep-to-wake transition than those without IH who can wake up and feel refreshed. IH can make you feel that despite sleeping you have a persistent mental fogginess, which stays with you throughout the day. Thinking clearly and carrying out even basic tasks can be difficult.

Many people with IH sleep more than 10 hours out of every 24. The disorder is chronic, and the symptoms can be relentless. If an effective medication to control symptoms cannot be found, it can be extremely difficult for people with IH to hold down jobs, remain in school, maintain marriages, and fully engage with their family and friends.

Although they can begin in childhood, symptoms of IH often first appear in the mid-to-late teens or early twenties. Symptom intensity usually vary and can worsen just before women’s menses. Symptoms may spontaneously improve in 10-15% of patients.

IH is a disorder of the brain and central nervous system whose cause is not known. There may be multiple causes, which apply to subsets of the IH population. Research from Emory University showed that in a subset of people with IH, there is an overproduction of a small molecule in cerebrospinal fluid that acts like a sleeping pill or anesthetic in a few cases. Although the exact composition of this small molecule is yet to be determined, it is known to interact with γ-aminobutyric acid (GABA), a principal player in the brain mechanisms that promote sleep. Because of this substance, the inhibitory and sleep-promoting actions of GABA are enhanced.

How is IH diagnosed?

Diagnosis of idiopathic hypersomnia is key to establishing treatment strategies and includes a combination of clinical assessment and diagnostic tests:

How is IH different from narcolepsy?

There are a lot of similarities between IH and narcolepsy. In fact, it can be hard (or impossible in some cases) to differentiate narcolepsy without cataplexy (narcolepsy type 2 or NT2) from IH.

Narcolepsy with cataplexy (narcolepsy type 1 or NT1) includes the core clinical symptom of cataplexy which only occurs in this condition. There are also more sleep boundary symptoms such as sleep paralysis, hypnopompic or hypnogogic hallucinations and sleep disturbance. In addition, people with narcolepsy with cataplexy have low or absent levels of orexin in cerebrospinal fluid (CSF), so if needed, the diagnosis can be confirmed by measuring this.

However, the symptoms of narcolepsy without cataplexy (narcolepsy type 2 or NT2) are much more similar, and can be hard to differentiate. This has led to alternative proposals, published in the the journals Sleep Medicine Reviews and Sleep for classifying central disorders of hypersomnolence which recognise the uncertainty in this area of both the underlying pathophysiology of NT2 and IH together with their clinical presentations.

Whilst at the moment, treatment options for NT2 and IH are similar and comprise of symptom focussed approaches, as we advance to developing more precision-based approaches a better understanding of the pathophysiology of these conditions and better ways of differentiating them clinically are needed.

What treatments are used for IH?

Treatments for IH are targeted towards symptoms of excessive daytime sleepiness (EDS) and excessive need for sleep (ENS). Sleep inertia is also a particularly challenging symptom for people with IH.

Several other medications have also been used, including selective norepinephrine re-uptake inhibitors such as reboxetine (currently in phase 3 clinical trials as a treatment for narcolepsy) and atomoxetine (approved for use in ADHD).

If I think I have IH, what should I do?

If you think you may have IH, and your sleepiness hasn’t responded to general measures like getting enough sleep and looking after your general health, you should talk to your doctor. They will be able to review your overall clinical history, may arrange tests if they suspect other conditions, and can refer you on to a sleep specialist for assessment.

Need more information on how you can sleep better?

At Sleephub we understand the struggle people endure with sleeping problems which is why we have created a comprehensive FAQs page with information for those seeking information about sleep disorders and potential solutions. You can also check out our extensive resources and subscribe to our podcast.