We all dream. But do our dreams have meaning?

Throughout history there have been lots of theories about the content of dreams and meaning of dreams.  These differ between cultures and societies.  Freud published his book “The Interpretation of Dreams” in 1900, outlining his theory of dreaming. It was first translated in to English in 1913 and the concepts and theories espoused by  Freud are still followed by many today.  However, in the 1940s and 1950s increasing research about the neuroscience of sleep gave a better understanding of the physiology of sleep.  This gave rise to a neuroscientific concept of dreaming as a physiological state with dreams not having any specific meaning.

History of dreaming in different cultures

Throughout history dreams have been interpreted in different ways by different cultures. Largely, sleep and dreaming were thought of as passive processes, so that unexpected events during sleep, such as dreams or nightmares, were given super-natural explanations. This occurred in almost all societies. There are many examples in the Bible, particularly in the Old Testament of dreams being instructions or visits from God. In Europe during the Inquisition in the 1400-1500s, dream experiences such as hypnopompic hallucinations (short dreams just on waking up), were seen as a sign of witchcraft. In other cultures these were thought of as being visitations from ghosts, for example ‘Ma Dè’ in Vietnam.

Freud and the ‘Interpretation of Dreams’

At the time Freud proposed his theory of dreaming in The Interpretation of Dreams in 1900 it was thought that nerve cells did not produce energy during sleep and as such conflict was needed to account for the energy thought to be present in nerve cells to produce dreaming.  Freud saw neutrons as passive receptors and donors of energy, requiring nervous quantity (Q’n) from sources outside neurons. As such, dreams needed to originate from somatic or external stimuli, committing Freud to a reactive, essentially passive brain and to a model of the psyche that shared these characteristics, with the primary motivating force of the dream language being to disguise a repressed wish arising from the id.

In the 1940s and 1950s the ability to measure sleep, initially in animals and then in humans, arrived.  It was shown that during dreaming-sleep there were spikes of activity in the brain stem throughout most animal species, in both mature and baby animals.  This led to neuroscientists hypothesising that dreaming was a physiological process of memory reorganisation rather than having any specific meaning. In 1977, J. Allan Hobson and Robert McCarley of Harvard Medical School proposed the Activation Synthesis Theory of dreams. This theory was based on neuroscientific findings from the 1960s showing that the brain stem sends messages to the visual cortex during REM sleep. The theory was that brain impulse from the brain stem (pons) which are active during REM sleep, represent disparate pieces of information that are fired off without explicit order or meaning. The brain takes these pieces of information and tries to make sense of them, knitting them together to form a narrative or story.

Which theory is right? 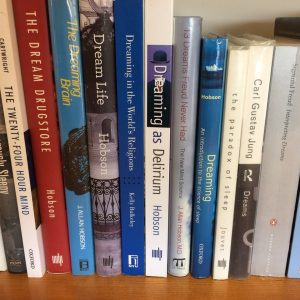 Some of my collection of dream books

Debate continues today between people who favour the theory of the neuroscientists versus Freud’s theory of dream interpretation.  Neither explains all of the features of dreams, and neither have been proved to be true or untrue. My personal bias is that I more lean towards the neuroscientific than Freudian approach. But, I did study under J. Allen Hobson and Robert McCarley at Harvard, so am influenced by my respect for their knowledge in this area. However, there are some phenomena that the Activation Synthesis Theory does not completely account for so I am open-minded as to dreams having meaning and don’t think we have all the answers.

What is actually happening during dreams?

During rapid eye movement (REM) sleep the brain shuts off inputs from the outside world and focuses its attention solely on internal inputs.  Signals from the occipital cortex, where we normally process visual signals, result in visual imagery being perceived by the brain.  These are accompanied at a brain stem level by PGO spikes and also by rapid eye movements.  During REM sleep there is muscle paralysis so that we do not act out dreams and harm ourselves.  The only muscles that are usually active during REM sleep are the muscles that move the eyeballs and the diaphragm to muscles to allow breathing.

Although dreams typically are felt to occur during REM sleep and these are the more bizarre and involved dreams that people typically report, we do have non-REM dreams.  Non-REM dreams are more typically events that have been recent such as thinking about things we did at work earlier in the day or going over and over recurring things that are of current concerns.  These are the type of dreams we can wake from during the night feeling like we have been going over and over the same topic.

What if I can’t remember my dreams?

Some people have variable ability to remember dreams.  I see people who are distressed by having no recollection of dreams and others equally distressed by having too much recollection of dreams.  How much we recall of our dreams seems to be variable between individuals and even within individuals it can change across life with different illnesses and medications.  Many of the modern antidepressants can induce vivid dreaming or make dreams more real and can also increase the propensity for nightmares.

If you are interested in your dreams and seeing if there are recurring themes or there are no recurring themes, you can complete a dream diary.  When this is done either in research or in working with people on dream interpretation, people are instructed to keep a diary by their bed and as soon as they wake from a dream note down as many details as possible that they can recall from the dream.  It is very common for people to forget the content of dreams within minutes after waking so it is important to write down your dreams as soon as you wake up if you do wish to capture the content of your dreams.