Struggling to teenager out of bed in the morning? Learn why and what you can do. 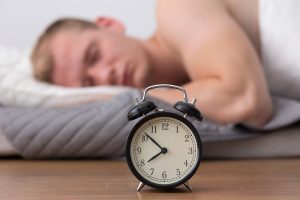 It’s very common for teenagers to have trouble getting up for school in the morning. It can also be difficult for them to get off to sleep at the time you wish them to get to sleep to be ready for school.  There are a number of factors that can contribute to these changes in sleep. Some relate to changes in sleep biology during the teenage years, and there are also social and psychological factors.

Biological changes to sleep in teenagers

Between the ages of around 13 and the early 20s, there are a number of changes in the way sleep is regulated.  The 3 main changes are:

The first 2 of these biological changes can have the effect of delaying the sleep-wake cycle of teenagers. The curves in the diagram below show the body temperature rhythms, with people usually falling asleep just after the peak and waking just after the low point of the temperature rhythm. The red curve shows the temperature rhythm of an adult, reaching a peak just before 10pm and minimum just before 6am. In contrast the blue line shows the pattern of a teenager with delayed internal clock. The peak may not be until midnight or later, and the low point after 8am.

Social and psychological changes around sleep

These biological changes also occur at a time when teenagers are busier, particularly towards the end of high school when they have more commitments, both out of school with part-time work and social activities, as well as greater demands with homework and study.  This can lead to studying into the evening making it harder for teenagers to switch off and get to sleep.  The stimulation of studying, together with light from devices like laptops and tablets can also inhibit melatonin production which in turn delays sleep onset.

It is also a stage in life where teenagers are looking to have greater control over their own life and schedule.  This can sometimes manifest as resistance to going to bed or defiance about going to bed when told to by parents.  There is also the fear of missing out (FOMO), with social connectedness being very important during teenage years and a lot of this occurring during the evening.  Going to bed early, teenagers can fear that they are missing out on opportunities for social connectedness that their peers may have.

What symptoms do these changes in sleep cause?

If teenagers are having trouble getting up in the morning it can often lead to other symptoms.  In essence, the biological problem is that the body clock becomes somewhat delayed.  This results in internal biological rhythms governing energy levels, alertness and sleep running a couple of hours later than the desired behaviour pattern of sleep and wake.

This means that if teenagers need to get up at 6:30 am, for example, for school, mood, cognition and alertness may not really be getting going until some hours later such as around morning recess.  At the other end of the day it can mean that even though teenagers may be told to go to sleep at 10 o’clock and turn lights out, their brain is still very active and not winding down as biologically it is the equivalent of around 7 pm in the evening for them.  This difficulty getting to sleep can lead to running short on sleep and being increasingly tired across the day.  A pattern I will often see is once teenagers then become more tired they find it even harder to get up in the morning and the pattern just becomes more ingrained and more difficult to change.

What can you do?

It is important to understand that when teenagers are having difficulty getting out of bed or getting to sleep at night, it is often somewhat different to our usual understanding of insomnia.  As such, it is not always stress related and so measures like managing stress, shutting off computers early in the evening, allowing time to wind down and managing sleep hygiene are important, but not necessarily the things to focus on.

One of the key things you can do as a parent is understand that often this is not motivational and not a manifestation of your teenager being lazy but largely a function of their changes in biology around this stage in life.  This means it is a difficult balance between trying to be sympathetic to what their body needs but still trying to get them to school in reasonable shape.

Most of the time if parents are able to understand this and teenagers also understand that this is the underlying problem we can work on strategies to improve the sleep pattern, without it degenerating too much into a fight between the teenager and parents about switching off and getting to bed early.

Going to bed later may help

In fact, commonly my instructions in this situation are to allow teenagers to go to bed a little later than what parents are comfortable with as their body is not ready for sleeping anyway and putting them to bed earlier just results in laying in bed awake getting frustrated about not sleeping. 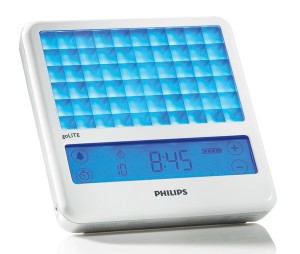 It is important though to set a regular rising time and manage light exposure as soon as possible on arising.  In most cases this can just be outdoor light such as getting up and as quickly as possible getting out the door and walking either to the train, tram or bus or to school itself without sunglasses so that natural light and movement combined can re-sync the body clock and prevent it from drifting later. However, in some circumstances, light therapy using light sources such as GoLiteBlu (left) or Re-Timer devices is needed. 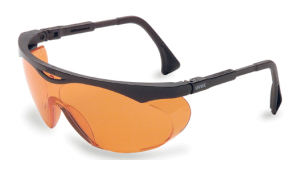 In the evening it is important to manage light exposure from tablets and laptops.  This can be done using applications such as the f.lux app or blue blocking glasses.  More details on using light therapy in the morning and blocking light in the evening can be found in this post on light treatment.

In more difficult cases there may be a role for melatonin but this should only be used in conjunction with your health professional as it does require a prescription and if you are going to this extent it is also important to make sure there are not other factors contributing to your teenager’s sleep difficulties.

I find I get the best results working with teenagers when I can get both parents and teenagers to understand what is causing the problem and agree on a management plan. If I can then get the teenager to take responsibility for implementing and sticking with the plan, it can help to avoid some of the conflict that can develop, particularly around bed times and turning off electronics before bed.

When parents take on sole responsibility for fixing their teenager’s sleep without much engagement or involvement of the teenager, it rarely goes well. It can increase conflict around bed timing and contribute to developing anxiety about sleep amongst both the teenager and parents.

When should you get help?

If you’re having trouble getting your teenager out of bed, and simple strategies such as setting a regular arising time and managing light exposure in the evening don’t quickly settle things, it’s important to talk to your family doctor (GP). As outlined in this post, there are things that can be done to help. There may also be other things contributing to sleep problems such as sleep apnea. If teenagers snore when they don’t have a cold it can be a sign of sleep apnea which can cause tiredness and trouble getting up in the morning.
Too often, teenagers are referred to see me only after they have missed many terms of school with sleep problems and are really struggling. It’s much easier to manage teenager’s before it gets to that point, so seeking help early can help to prevent these problems.