Augmentation in restless leg syndrome can be difficult to manage and actually occurs relatively commonly. In fact, some studies suggest that most people taking dopamine agonists for restless legs will develop augmentation over time. In 2016, guidelines were published which provide a useful guide to managing augmentation when it develops. 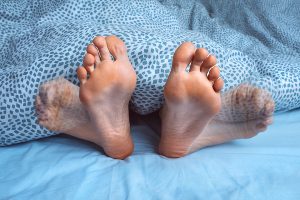 Augmentation is when people who are on long term treatment with dopaminergic agonists for restless legs develop a worsening in their restless leg symptoms over time. It was first described in 1996 and at that point was felt that about 75 percent of people on levodopa or other short term dopamine agonists would go on to develop augmentation.

In the year since when it has been more systematically studied, it appears that around eight percent of people on long term dopamine agonists develop augmentation each year they are on treatment.

The common symptoms that people describe, which actually characterise augmentation is not just a worsening or greater intensity of symptoms. It’s finding that symptoms occur earlier in the day, which can be two to four hours earlier than they were previously coming on. It can take less time for symptoms to come on after sitting down or beginning to rest. Symptoms occur in other parts of the body, so spread up the legs, into the arms, into the trunk and drugs seem to have a shorter duration of effect and aren’t as effective for as long a period.

Based on that, the International Restless Leg Syndrome Study Group developed four questions that can be used clinically to screen for augmentation:

How should augmentation be managed?

The most effective strategy for managing augmentation is to prevent it occurring in the first place, by not using dopamine agonists. This is reflected in the change in treatment guidelines, with dopamine agonists no longer being first-line therapy for restless legs syndrome. It’s also important to look at non-drug strategies in managing restless leg symptoms before using any prescription medication: making sure iron stores are adequate, looking at strategies such as massage, pacing or movement as a way of managing people’s symptoms. If people do need a medication, first-line therapy should be an alpha-2-delta ligand, such as gabapentin, pregabalin. If people do need a dopamine agonist, because they don’t respond to other medications such as alpha-2-delta ligands, the dopaminergic load should be kept low by using the minimum effective dose for the shortest required period of time.

If someone has already got augmentation, my approach is generally to ensure that their iron stores are adequate. Sometimes augmentation can develop in people who are actually stable on dopamine agonists but get low iron stores which exacerbates their restless leg symptoms.

If augmentation is relatively mild, I won’t necessarily switch people off dopamine agonists. I might even temporarily increase the dose, really to get a sense if they’re beginning to develop augmentation,  knowing I’m going to have to switch them off the drug at some point. But if they are not doing too badly, temporarily increasing the dose buys more time before they have to switch off the drug. Another thing I will try is splitting the dose of the dopamine agonist, so that they’re a lower dose at two time points or getting them to take the dopamine agonist a little earlier.

This is also a group where I will consider a high potency opioid as a bridge so that people might be on an opioid for a couple of months while they’re getting off the dopamine agonist, letting things settle and eventually rotating back to going on to a lower dose of dopamine agonist again.

What should you do if you think you have developed augmentation?

If you think you have or are developing augmentation of your restless legs symptoms, you should contact your treating doctor so they can review your clinical symptoms and medication and make a plan to manage your symptoms.

Need more information on how you can sleep better?

At Sleephub we understand the struggle people endure with sleeping problems which is why we have created a comprehensive FAQs page with information for those seeking information about sleep disorders and potential solutions. You can also check out our extensive resources and subscribe to our podcast.