Suvorexant is an effective treatment for insomnia 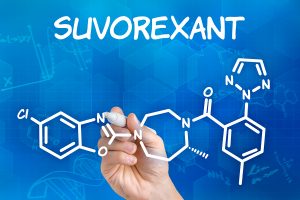 Until now, medications for insomnia have largely focussed on enhancing sleep promoting mechanisms in the brain. However, the physiology of insomnia for most people is a problem of the alertness system not switching off. In the late 1990s orexin (also called hypocretin) was discovered as one of the key neurotransmitters involved in promoting wakefulness. Since then the pharmaceutical industry has been working on developing orexin antagonists (blockers) as treatment for insomnia. Suvorexant (brand name Belsomra) is the first of these to be approved for use.

Why is blocking orexin a potential insomnia treatment?

For an in depth discussion on the role of orexin in sleep regulation, listen to this interview with Prof Daniel Hoyer.

Suvorexant is a highly selective dual orexin receptor antagonist which acts on both the orexin 1 (OX1) and orexin 2 (OX2) receptors.  By binding to the orexin receptor, suvorexant blocks the binding of orexin and suppresses waking drive.

Suvorexant reaches a maximum concentration around 2 hours after taking it. This can be slowed down by up to 1.5 hours if it is taken with a high-fat meal. The half life of suvorexant is approximately 12 hours, and it reaches steady state concentration by 3 days.  It is largely eliminated by metabolism, primarily by CYP3A with some metabolism also by CYP2C19.

What do the clinical trials show?

What about hands-on experience with suvorexant?

Suvorexant was first approved for use in the United States in 2014 with an approved starting dose of 10mg. Initial online reports of people’s experiences were quite negative with people reporting it wasn’t particularly effective. Consumer reports published a report in 2015 suggesting that suvorexant ranked below other sleep medications in terms of real-world effectiveness.

I’m not sure what to make of these reports of people’s experiences with suvorexant. I wonder whether people were expecting too much from a new medication as a ‘magic bullet’ for insomnia and felt disappointed when it didn’t meet this unrealistic expectation. I also wonder whether the starting dose of 10mg in the United States gave less of an effect than doses of 20mg that were evaluated in the clinical trials.

What should I expect if using suvorexant?

Sleep may feel different: As the mechanism of suvorexant’s action is different to the action of other sleep medications, you should expect that the sleep you experience taking suvorexant may be different from how sleep feels when taking other sleep medications. For example, drugs that work via enhancing GABA, such as benzodiazepines and benzodiazepine receptor agonists, can have a sedative effect and induce amnesia. That can make it feel as if time has passed with no awareness of what has happened. Some people equate this feeling with good sleep, which may not be the case.

Sleep may not feel better immediately: If switching from another type of sleeping tablet to suvorexant, there may be a period of rebound insomnia, or worsening insomnia symptoms, from stopping the other medication. In addition, in the trials of suvorexant, it took some time for people’s experience of sleep to improve even though sleep measured on a sleep study improved on the first night after taking suvorexant. So, it’s important not to judge too early whether suvorexant is having the desired effect. Hang in there long enough to ride out any rebound insomnia and to allow suvorexant to have its optimal effect.

Effects may occur at different parts of the night: Whilst suvorexant does help people get to sleep faster, it’s main effects appear to be throughout the night, even in the second half of the night when other medications often have less of an effect. Suvorexant may not cause people to wake less, but seems to help people get back to sleep more quickly increasing the overall amount of sleep.

How is suvorexant prescribed?

In Australia the recommended starting dose of suvorexant is 20mg (15mg for those over the age of 65). It is indicated for the treatment of insomnia, characterised by difficulties with sleep onset and/or sleep maintenance and can be used on an ongoing basis if needed subject to review by the prescribing doctor after 3 months of use.

Suvorexant should only be used under the supervision of a doctor and in conjunction with non-drug treatments for insomnia such as cognitive behavioural therapy which includes components such as sleep hygiene. Suvorexant should be taken within 30 minutes of going to bed, at least 7 hours before the planned time of awakening.